50 years ago, the Dow Air Force Base flew its last plane and housed its last Airmen.  What was left behind became Bangor International Airport and the more than 800 units of Military Housing are now Public Housing for (what was then known as) the Housing Authority of the City of Bangor.  BangorHousing has a long history with the Military (our first attorney, William Cohen, even went on to become Clinton’s Secretary of Defense) and was born out of a need for low income housing and a surplus of opportunity.  The legacy of the base remains an important aspect of our culture, and -so many years later- BangorHousing respects and appreciates the relationships we have with Military Veterans. 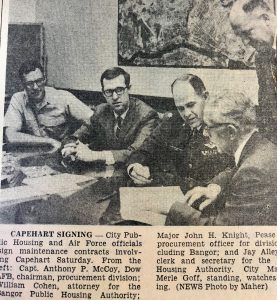 Here are some of the stories from our community:

Stuffy (as he asked us to refer to him as so his Marine buddies would know who we were talking about) was raised in a family with a military background including brothers and uncles, along with relatives who were killed in action during the Battle of the Bulge and Iwo Jima.  Stuffy enlisted in the Marine Corps at 17 and it was the “best thing that ever happened to him”.  In 1965 Stuffy left his station and was transferred to Vietnam where he was part of a Special Ops unit.  After Vietnam, he attended college where he met his close friend (who later became the head of American Cable) whom he worked with as a consultant in California before coming to Maine.  If given the chance, he would “do it all again”.

George was in the Army from 1967 to 1969 as a Specialist 4th class Stevedore.  He was a supervisor and trainer for the army working on cargo ships in Fort Eustis, VA.  After the Army, George moved back to Greenville and worked for Prides Manufacturing Before a few other lines of work until he retired in 2009.  During retirement George has done some volunteer work for BangorHousing and loves to spend time with his beloved pup named Lady.

By April of 1958, starting in January, Charles had graduated college, got married, and was drafted into the military.  During his time in basic training Charles was recruited for a counterintelligence team at Fort McPherson in Atlanta, GA where he was active for 2 years.  During his Active Duty, Charles earned his commission in the Corps of Engineers where he spent the next 30 years, before retiring in 1989 with the rank of Colonel. Charles worked in the field of Soil and Water Conservation at the State and Government level for about 30 years.  He brings to BangorHousing extensive experience working on many boards relating to Public Housing including 4 Directions Development, Augusta Regional Church Housing Board, and the Genesis Loan Fund.  Charles currently serves on the Board of Commissioners for BangorHousing, The Historic Preservation Commission (formerly), and the City Planning Board for the City of Bangor.  When asked why he has and continues to give so much of his time to others and his community he wanted us to know that it is his way of “giving back”, and that he is happy to do so.

James enlisted in the Army in 1968 out of a sense of duty to serve his country and make a difference in the climate of the United States at the time.  He was stationed in Germany for about a year followed by being deployed to Penang in the Vietnam War.  James retired from the Army as a Corporal in March of 1970 after his time as a combat engineer.

Richard is a 1969 graduate of Norwich University in Vermont (the oldest private military university in the country), which resulted in his direct commission into the Army Military Police Corps.  In the 9 years Richard was commissioned, and before leaving the military as a Captain, he was stationed in Georgia (Fort Gordon), New Mexico (Sandia Base), New York, Alabama (Fort McClellan), Hawaii (Schofield Barracks), and Vietnam.  One of Richard’s most notable posts was for the Defense Atomic Support Agency.  After the military Richard founded Eagle Security Systems here in Bangor.  Richard has served on the BangorHousing board of Commissioners for 12 years as a way of giving back to his community.

What do these men have in common?  These Residents and Commissioners are Veterans of the U.S. Military, they support BangorHousing in its mission on a basis of mutual cooperation and respect, and they have our endless gratitude for their service to our Country.  After speaking with them, there was a sense of pride and admiration for their time, which is inspiring.  On this Veteran’s Day and right around the time of our 50th Anniversary, BangorHousing wanted to show our appreciation to the Men and Women who have given themselves in service to our Country, so that we could continue to provide the help and services that we pride ourselves on today.

To George, James, Charles, Richard, Stuffy, and the rest of the Veterans of the U.S. Military – We thank you for your service!